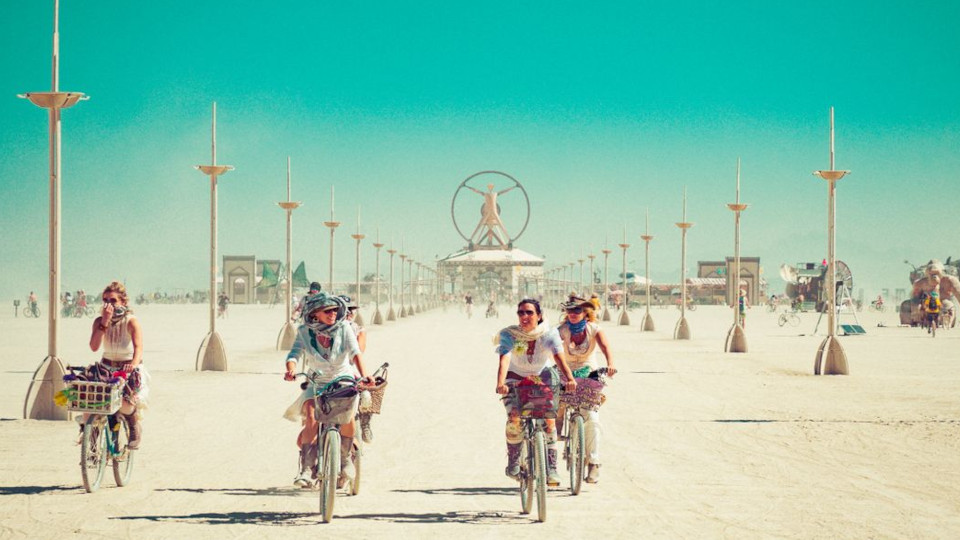 Burning Man is a challenging enough of a thing to describe to those who actually want to be a part of its dusty and visually-stimulating revelry. It's virtually impossible to explain to those who know nothing of its fiery and overwhelmingly post-apocalyptic appeal.

In short, Burning Man is an annual event, a sort of art festival/city consisting of over 60,000 inhabitants devoted to things like radical-inclusion, self-expression, and all manner of mayhem and mischief.

The temporary city, Black Rock City — which vanishes within a few weeks — has the sort of infrastructure that is conducive to self-reflection and open-mindedness, whether drug-induced or not.

The following is a series of pro tricks that are meant to facilitate certain elements of one's Burning Man experience.

Some of the best things at Burning Man you might already know about. Some you might just happen upon by mistake in the middle of a whiteout at 4 am.

Probably you'll stumble on Dust City Diner (a classic-looking 1940s diner, somewhere in the deep, dark playa) in the middle of an apocalyptic dust storm, and the only thing you can make out is a never-ending line up of hopeful patrons lit by a pulsating mix of personal supply of EL wire and LED lights, and whispering rumors of freshly flown-in sashimi. 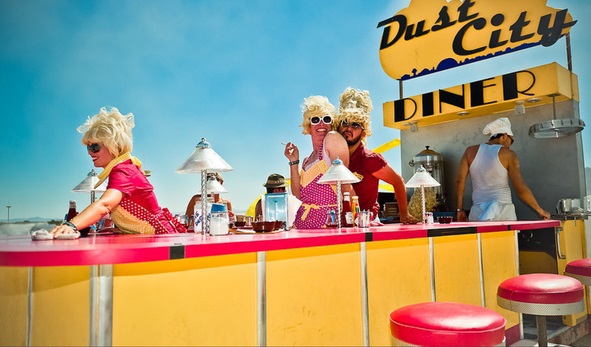 Say you want this whisper of sashimi but you want nothing to do with that godawful line. Well, fortunately they'll let you jump the line if you'll let them publicly shock you with their cattle prods. Chances are they'll probably jolt you with a second shock just for good measure.

Sometimes, while waiting in lines, a line rotarian might walk around, offering a chance to skip the line to whoever can generate an erection the fastest, by whatever means necessary — be it through physical stimulation, or telekinetic prowess, or otherwise.

Public toilets are a gift from the administrative gods of the Department of Public Works (DPW) and can range from extremely tidy and sanitary to depraved and nightmarishly intense, depending on the time of day and the location.

Despite the cleanliness and/or hellishness of their interiors, port-o-potties are unavoidable and everyone must give them a squat at some point. The good news: You might be fortunate enough to be (unknowingly) part of an art piece.

Across the playa, bands of people descend on the port-o-potties, unfurl a long red carpet in front of an occupied john and wait for its inhabitant to exit. As they do, a star-studded greeting awaits, riddled with applause, adulation, and, occasionally, sparkling wine.

#4. How to find the best dance parties

Dance parties occur in almost every obscure corner of BRC, but some of the more heroic technotrobic jostles occur only after a long, meandering acid trip and a side of pre-dawn karaoke followed by a bike ride out to the Temple (a holy destination that can break even the the hardest among us) to watch what seems like the world's most ancient sunrise.

If you can make it this far, and the you're lucky enough to be accompanied by friends who have generous portions of bourbon and cigarettes, then you're halfway to Robot Heart, whose unparalleled deep playa location and setup showcases some of the best DJs during their sunrise lineup.

#5. How to gracefully endure a spontaneous public prostate examination

Biking around the midday playa with a beer in one hand and a fruity cocktail in other becomes a well-honed skill after a couple of days.

Having little to no grip on your bicycle handlebars becomes a much more agreeable affair when some attractive (and heavily topless) young woman waives you down, claims to be a doctor, and ultimately offers you a free prostate exam in the middle of the street, among plenty of happy onlookers (no doubt their good health had been confirmed moments prior).

Despite your inebriation, and the effects of the pounding desert sun, you might not be able to avoid having a perplexed and unsure expression on your face.

Thankfully, your expression of uncertainty may be eased once you've been reassured that with the exam comes the promise of a beer, a shot of tequila, and a hearty round of applause from everyone around.

Most burners are happy to bathe in the alkali dust of the playa (an unavoidable occurrence), but for those who don't sleep in RVs, or have built makeshift showers, or don't want to be scrubbed down in the middle of the street by strangers, there is Dr. Bronner's foam shower.

A huge indoor tent structure where dozens of people at a time strip naked, dance to throbbing and pulsating electronic music are sprayed with rich, pulpy foam from a large canon and later hosed down communally like inmates in a delousing chamber.

The experience is unreal.

#7. How to have the best birthday beats

If you happen to celebrate your birthday while at Burning Man, and your pals have not already issued the correct dose of birthday punches (the number corresponding to one's age), then you can always seek punishment at The Thunderdome.

The Thunderdome is Burning Man's Mad Max-inspired arena of fiery mayhem, where contestants are armed with lightly-foamed batons, harnessed into high-tension bungee supports, cocked as far back as humanly possible, and then released at high speeds where they crash into each other, flailing and swinging aggressively.

Spectators clamor and climb the skeletal structure of the geodesic dome and cheer wildly as combatants exorcise deep-rooted demons, or as rival camps work violently through long-standing issues.

The Thunderdome is a serious place where people work heavy shit out of their systems. Nothing gives you better street cred than saying that you got your pummeling birthday beats fighting in The Thunderdome at Burning Man.

There you have it. A few tips on how to navigate your way in and out of some of Burning Man's best and weirdest.