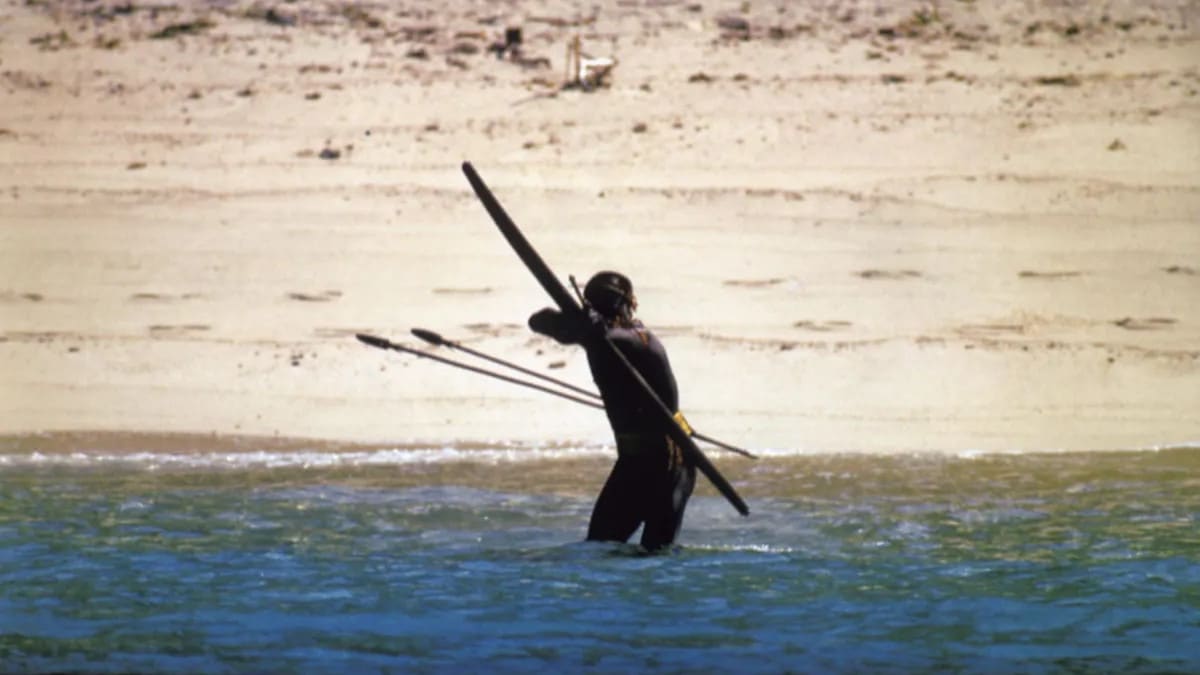 You've just been chosen as a contestant for "Survivor: Andamans." But instead of immunity idols, there are red buckets (more on that later). Instead of elimination challenges, there's smallpox. And instead of television hosts, there are missionaries and Indian bureaucrats trying to wipe you out with bible worship and civilization. What do you do? Self defense them to death, of course.

As one of the last Uncontacted Peoples, they may be the only humans in the world who don't know about vaccination booster shots. And to keep that dream a reality, they'll kill anyone who sets foot on their island.

There's no evidence that the Sentinelese have an alphabet, and no outsider knows their language, so they've resorted to sticking people with sharp objects and displaying rude gestures to get their message across. Observed gestures include swaying their penises, and turning their backs and assuming a "defecating" posture.

They have been helped by the fact that their message is a simple one ("Get off my lawn!"), but there has been some minor inconsistency in hostility from the Sentinelese -- especially if you offer them bananas.

In 1974, a National Geographic film crew went to the island to film the documentary Man in Search of Man (skip to 11:11 in the video below). When the motorboat broke through the barrier reefs, the locals emerged from the jungle and shot arrows at it. The crew landed at a safe point on the coast and left gifts in the sand, including a miniature plastic car, some coconuts, a live pig, a doll, red and green buckets, and aluminum cookware.

The Sentinelese followed up by launching another volley of arrows, one of which struck the documentary director in his thigh. The man who wounded the director withdrew to the shade of a tree and laughed proudly while others speared and buried the pig and the doll. They left afterward, taking the coconuts, cookware, and red buckets. They ignored the green buckets.

In 1981, a ship traveling from Bangladesh to Australia ran aground in rough seas just off North Sentinel Island, stranding a small crew. After a few days, the captain dispatched a distress call asking for a drop of firearms. More than 50 armed islanders were firing arrows at them and preparing boats to invade the ship. Luckily strong waves prevented the Sentinelese canoes from reaching the ship, and also deflected their arrows. They were rescued by a civilian helicopter a week later.

Later on a scrap dealer assigned to dismantle the wreck recorded friendly interaction with the Sentinelese (insofar as they didn't kill them) after bribing them with bananas:

After two days, in the early morning when it was low tide we saw three Sentinelese canoes with about a dozen men about fifty feet away from the deck of [MV] Primrose. We were skeptical and scared and had no other solution but to bring out our supply of bananas and show it to them to attract them and minimize any chance of hostility. They took the bananas and came up on board of Primrose and were frantically looking around for smaller pieces of metal scrap......They visited us regularly at least twice or thrice in a month while we worked at the site for about 18 months.....

In 1896, a convict escaped from the penal colony on Great Andaman Island on a makeshift raft and drifted across to the North Sentinel beach. His body was discovered by a search party some days later with several arrow-piercings and a cut throat.

In 2006, Indian fishermen illegally harvesting crabs off the island had their boat's makeshift anchor fail on them and they started drifting towards shore. They did not respond to warning calls from passing fishermen, and when their boat drifted into the shallows a group of Sentinelese warriors attacked it and killed them with axes. According to one report, the bodies were later put on bamboo stakes facing out to sea like scarecrows. When an Indian Coast Guard helicopter tried to retrieve the bodies, the Sentinelese attacked it with spears and arrows, and the mission was abandoned.

And in 2018, you may remember from the viral news at the time, 26-year-old American missionary John Allen Chau travelled to North Sentinel Island with the aim of contacting and living among the tribe -- with equally fatal consequences. Chau approached the island in a canoe and attempted to communicate and offer gifts, but retreated after facing hostile responses.

On another visit, the missionary recorded that the islanders reacted to him with a mixture of amusement, bewilderment and hostility. He attempted to sing worship songs to them, and spoke to them in Xhosa, after which they often fell silent, while other attempts to communicate ended with them bursting into laughter. Chau said the Sentinelese communicated with "lots of high pitched sounds" and gestures.

Eventually, according to Chau's last letter, when he tried to hand over fish and gifts, a boy shot a metal-headed arrow that pierced the Bible he was holding in front of his chest, after which he retreated again. Fishermen later saw the islanders dragging Chau's body, and the next day they saw his body on the shore. His body was never recovered.

During a visit to North Sentinel island on 29th March 1970, a group of Indian anthropologists observed sexual behavior never before (or since) reported from any Andamanese group. An eyewitness observed the following scene from his boat:

... we were about to return when a couple of natives were seen on the land, apparently keeping a vigil. We approached closer, keeping a safe distance from the shore, when more men came out of cover armed with their usual weapons, threatening to shoot at us. We had taken a few large fish caught during the previous night to offer as an appeasement gift to these people. We exhibited these, with gestures of offering. Meanwhile, men were converging on the spot from all direction. Some were waist deep in water and threatening to shoot. However, we approached closer and threw a couple of the fish towards them. They fell short of them and were being carried away by the water. This gesture had a mellowing effect on their belligerent mood. Quite a few discarded their weapons and gestured to us to throw the fish. The women came out of the shade to watch our antics. In their height and stature they were equal to the men except that the lines were softer and they carried no arms... There were 20 children. We approached the coast a little further from them and managed to land a couple of fish on shore. A few men came and picked up the fish. They appeared to be gratified, but there did not seem to be much softening to their hostile attitude. Again we approached the group. They all began shouting some incomprehensible words. We shouted back and gestured to indicate that we wanted to be friends. The tension did not ease. At this moment, a strange thing happened - a woman paired off with a warrior and sat on the sand in a passionate embrace. This act was being repeated by other women, each claiming a warrior for herself, a sort of community mating, as it were. Thus did the militant group diminish. This continued for quite some time and when the tempo of this frenzied dance of desire abated, the couples retired into the shade of the jungle. However, some warriors were still on guard. We got close to the shore and threw some more fish which were immediately retrieved by a few youngsters. It was well past noon and we headed back to the ship...

Situations are known from other Andamanese groups when over-excited males were calmed down by the women, but none is known to have involved public group sex.

Both the British and the Indians have attempted to bring them the benefits of civilization, like measles and politics. So far, the Sentinelese have only been interested in fish, scraps of metal, coconuts, and the mentioned red buckets.

The most important thing to note about the Sentinelese "Screw off and die" policy is that it works. Several other Andamanese tribes have been wiped out by contact with the outside world, while we barely know what these guys look like.

But shooting arrows at technologically superior strangers will only work until the strangers decide they want what you've got -- like tasty, tasty waves. In 1998, photographer John Callahan organized the first surfari to the Andamans, so it's only a matter of time before somebody wants to surf Sentinel.

And then all bets are off.