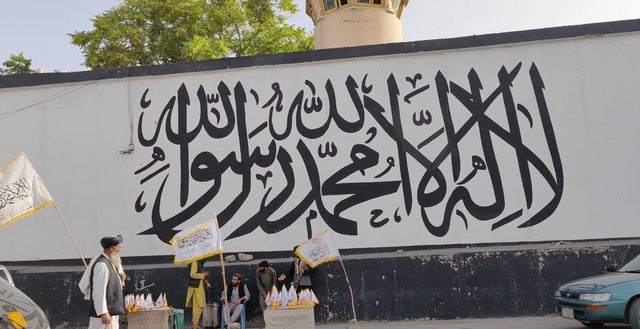 Since I live in Peshawar, I crossed into Afghanistan through Torkham with a multiple-entry Pakistani visa extension. Torkham is chaotic, people trying to sneak through both sides and guards caning the people they catch. First Taliban I talk to on the Afghan side saw my Australian passport, laughed, asked me why I’m here, and then jokes ‘it’s dangerous here for you’ while miming cocking a gun and putting it to my head. Nice intro. Passed border formalities, taken into one of the offices, asked more straightforward questions about why I’m there, drank some tea. The Talibs on the border were all interested in why I was there, and actually asked to take photos with me.

Met a driver I’d pre-arranged to take me to Kabul. The drive to Kabul is breathtaking, jagged rock faces and huge mountains on either side of the road. About 10 checkpoints on the way to Kabul. Got invited inside for lunch with some Talibs at one of the bigger ones. No special permission or handler assigned and I was allowed to move freely. 5 hours later, arrive in Kabul. Kabul is a huge city and very developed, with parts that unironically look like Vegas or Dubai, and then very underdeveloped parts. Heavy security architecture left over from yank days, concrete barriers everywhere. Moving throughout the city is easy, apart from the traffic jams, and every area is open. Some checkpoints lie before important places like the airport and diplomatic areas. U.S. embassy, picrel, has been redecorated with the Taliban banner and images of the U.S. flag toppling like dominos.